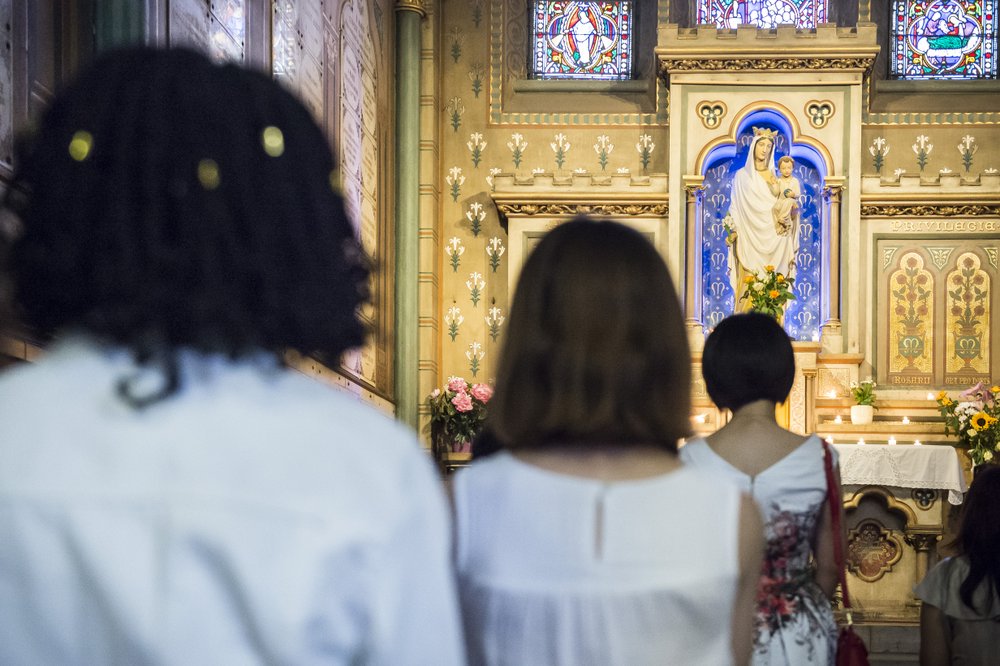 What to offer for the feasts of faith? Our selection of religious gifts

For a first communion

Book. 10 years old, Miko has the pain of losing his grandfather. The latter, very religious, left him a thick book, containing seven bookmarks: a Bible. With the complicity of his old friend the monk Honorius, he had even concocted a posthumous treasure hunt for his atheist grandson… Illustrated in the manner of mangas, this album with flaps synthesizes the essentials of the Catholic faith with gusto and pedagogy. .
Miko and the 7 secrets of the Bible, by Gaëlle Tertrais and Albert Carrères, Mame, €14.90.

Jewel. In stainless memory of this great day, a discreet and elegant little jewel in yellow gold, which can be worn on the wrist or as a pendant. Size: 1cm.
Thin mini-cross, La Couronne, €75. amglacroonne.com

Statue. When a great youth designer becomes a sculptor… Maïte Roche has produced a original alabaster statue, whose softness of features is appreciated. Height: 19.5cm.
Our Lady of Confidence, €88. counter-religieux.fr

Biography. Discover the life of Carlo Acutis in the style of a novel: challenge met, served by a suppressed pen. Died at 15 from leukemia and beatified in 2020, the Italian teenager is an apostle of the Eucharist, “my highway to heaven”, as he defined it. A football and computer lover, this young man with curly hair and laughing eyes has notably created a site on Eucharistic miracles. This book launches a new youth collection entitled “Witnesses of the invisible”. From 7 years old.
Carlo Acutis, by Bénédicte Delelis, Emmanuel jeunesse, €12.90.
Note: Bénédicte Delelis is also publishing, with Anne-Sophie Rahm and Éric Puybaret, a new volume from the best-selling book-CD collection, “Graines de saints”, attributed to Claire de Castelbajac (Mame, €19.90).

For a profession of faith

comics. What do Thérèse of Ávila, Josephine Bakhita and Edith Stein have in common? Gandhi, Jean Paul II and the Cistercian of Tibhirine Christian de Chergé, assassinated in 1996? Despite the difficulties of their time and their respective situations, they did not give up. Powered by their convictions, they acted boldly. These beautiful figures have made the world a little better, and invite the reader to take part.
peace builders, by Benoît Marchon, Monique Scherrer and Greg Newman; committed women, by Sophie Furlaud, Bénédicte Jeancourt-Galignani, Bayard Soleil, €11.50 each.

Wall cross. A pretty dancing cross, in enamelled bronze, made in France in a family workshop which offers a choice of four colours: red, blue, green, white. Height: 10, 12 or 14 cm.
Thin enamelled cross, from €50. tailors-images.com

Icon. What intensity in the gaze of Christ who saves! A creation of Sister Françoise-Emmanuel, Benedictine of the abbey of Venière (71), famous for her wooden plaques of patron saints.
Good Shepherd Icon, €48.

Book. A touch of philosophy to complete more spiritual gifts? The excellent “Les Petits Platons” collection devotes a story to Simone Weil. Raising awareness of social justice and sketching out a fairer society: “Man also needs the soul. » (Another recently published volume is sold to Husserl.)
Simone Weil in the kingdom of the forgetful, by Anne Waeles and Magali Dulain; Commentary Husserl saves conscience, by Jean-Baptiste Fournier and Camille Nicolazzi, Les Petits Platons, €14 per volume.

Book. “The Holy Spirit is the inexhaustible source of God’s life in us. » Simple and concrete, this concise manual brings together various teachings of Pope Francis. The latter notably enumerates in a lively way the seven sacred gifts – for the record: wisdom, intelligence, advice, strength, science, piety, fear.
Holy Receive the Spirit, of Pope Francis, Emmanuel editions, €12.

comics. Several generations of young readers have read and re-read the life of Saint John Bosco in comics, thanks to the mythical album of Jijé, which has largely contributed to making known the figure of the founder of the Salesians. What is less known is that the most common version of the album (still available, in color, from Éditions du Triomphe) was presented from a first edition, in 1941, which Joseph Gillain completely redrawn, box after box, in 1949. The Dupuis editions therefore had the good idea to release a facsimile of the original, whose black and white and format do not have to be ashamed of the comparison with the later recovery (it’s even quite the opposite). A biography with a somewhat dated tone, but with the incomparable flavor of the great albums of popular edification of the middle of the 20th century: an immense classic to be discovered (or rediscovered yourself) with happiness!
Don Bosco, friend of young people, of Jijé, Dupuis, €36.

Beautiful book. In one album, 20 biographies that demonstrate the diversity of charisms, from the Apostle Paul to Mother Teresa, passing through little-known Christians, such as the defender of slaves Bartolomé de las Casas, Doctor René Laennec, the American educator Catherine Drexel, or the villagers of Chambon-sur-Lignon who saved nearly 3,500 Jews under the leadership of Pastor André Trocmé. Each, in his own way, has been a disciple of Christ.
They changed the world by Baudouin de Guillebon, Mame, €19.90.

CD. The harmonious voices of the two friends Anne and Jacinthe, who make up the duo Les Frangines, invite you to celebrate life with their joyful melodies with inspired lyrics. “I want us to run towards the sun, towards the light, towards everything up there…” (Our ideas). “Love is the cry of the dawn, love is the hymn of life” (Always love! Love again!). This new album includes their song in tribute to Notre-Dame de Paris.
Remarks, Frangines, €15.99. On tour from July 2022…

Deco. This beautiful Bible verse to display at home encourages you to grow in faith! The journey of a lifetime, from baptism to the sacrament of the sick… A handcrafted creation in wire by the artist Agapi for Catho Rétro. Height: 9cm, length: 41cm.
€50. cathoretro.com