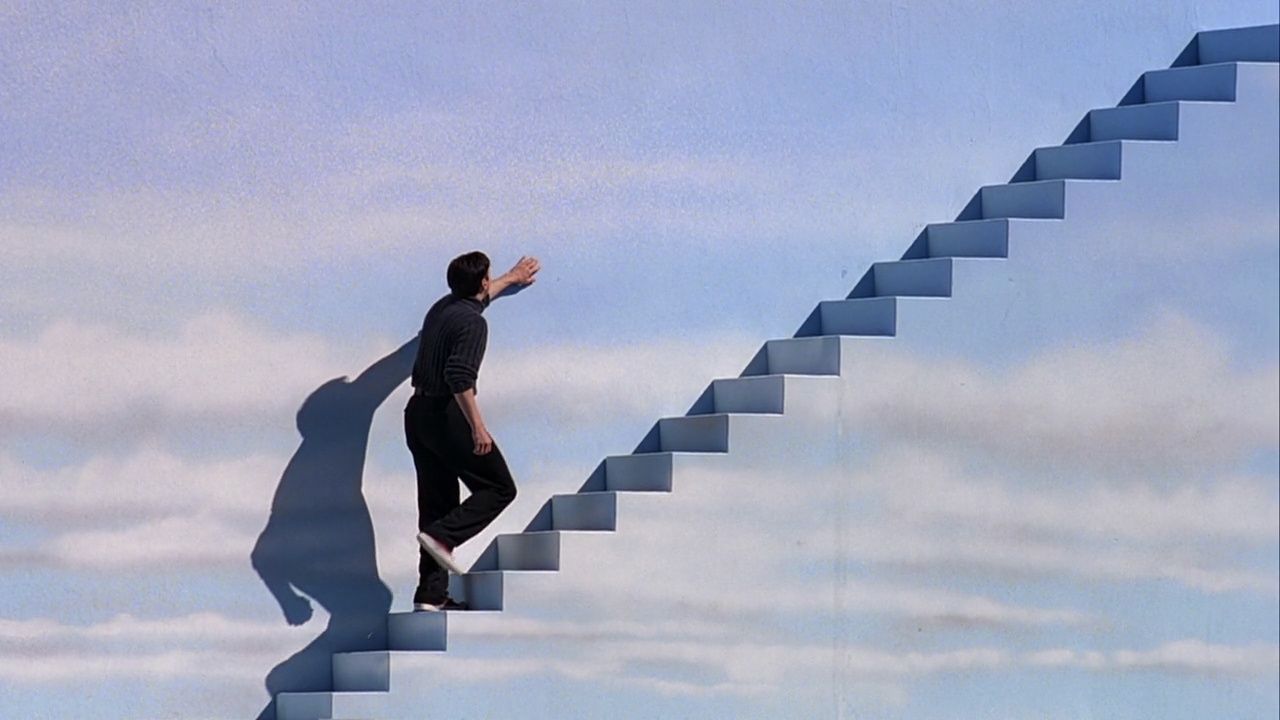 Truman Burbank leads a calm and happy life. He lives in a neat little lodge in the glorious seaside resort of Seahaven. He leaves every morning for his office as an insurance agent, from which he comes out eight hours later to return home, to savor the comfort of his model habitat, the unfailing good humor and the mechanical smile of his wife, Meryl. But sometimes, Truman suffocates under so much happiness and at night, anguish overwhelms him. He felt more and more alien, as if those around him were playing a role. He sent himself observed…

THE CAVERN OF PLATO

It’s a Jim Carrey climbing the steps of The Truman Show (1998) which this year welcomes journalists and film buffs from all over the world to Cannes, a direct echo of the (red) steps of the Palais des Festivals which lead to a world of fiction when dear Truman is about to ‘get out. Twenty-four years after its critical and popular success (Oscar nominations, Golden Globes for Jim Carrey, Ed Harris and the composers of the soundtrack…), The Truman Show is it still relevant in this year of grace 2022 saturated with social networks in which lying is no longer a spectacle but an increasingly dangerous reality?

Before trying to answer the question, let’s first go back to the film itself, which does not demerit, far from it, by its cinematographic qualities. At the origin of the project, we find a screenplay written by in the early 1990s. Originally from New Zealand, Niccol would later become a talented screenwriter (The terminal of Spielberg in 2004, it is him), but also a director of famous films (Welcome to Gattaca, 1997, Simone, 2002, lord of war, 2005…). Producer Scott Rudin bought the rights to his screenplay in 1993, Paramount quickly gave the green light, and after having retained Brian De Palma and even initially Niccol himself as director, it was finally on Australia Peter Weir the choice is made. From the australian new wave (Where Ozploitation) of the 1970s (from which also emerged George Miller, Phillip Noyce, Bruce Beresford, Russell Mulcahy, Ted Kotcheff, Colin Eggleston…), Weir is fascinating a director whose success of films made in his country (1) – the best known being the extraordinary Picnic at Hanging Rock – alerted Hollywood who quickly enlisted him, which led to great success (Witness, 1985, The Mosquito Coast, 1986, Dead Poets Society, 1989, Master and Commander, 2003…). Once on the project, Weir completely appropriates it.

The importance of the scenario

Which prompts us to ask ourselves: are directors authors? The question may seem incongruous, but can it nevertheless arise when an original screenplay is put into images by a director who is not the author? Isn’t a screenplay, original or not, always “adapted” by the director? Putting images to words is a crucial step in the film process. After all, the director puts his “paw” at all stages of production: writing and/or rewriting the script, choice of filming locations and sets, choice of actors, music, visual and sound design, etc. . Each element passes through the prism of the director’s sensitivity to ultimately arrive at what, at best, will evoke a personal work. In the case of The Truman Show, the choice of the main actor gives the film its full tone. We prefer Jim Carrey, then in the know of his career, and so much in demand that he had already signed for two other films. During the twenty months of waiting, Weir had Niccol rework his script (16 versions!) and preferred to erase the dark side of the original version, in perfect harmony with the choice of actor. Weir wants every aspect of the created world to be completely believable, that everything works, so that the viewer can “Let go of disbelief”. He goes so far as to write fictional biographies of the main characters and a history of the Truman Show himself, which greatly helps the actors to appropriate their role.

Initially, the project tended rather towards science fiction, even horror, and was set in a damp and cold New York City with a very dark tone: Truman was alcoholic and depressed, and he was dealing with fake crime incidents. Weir can’t believe a world-watched TV show can be so dark: said the director. Hence the choice to set the action in Seaside, Florida, a real intended community which already resembles a film set and anchors the film in an idyllic vacation context. Another big difference between the initial versions and the final version: at the end of the film, Truman left his world/studio to confront the main actors and Christof. By sidelining Truman’s return to the real world, Weir leaves the ending open and stimulates the viewer’s imagination.

A version of the screenplay was translated and put on sale in France under the title The Truman Show, the movie book. We discover an intermediate version quite close to the one that was filmed, but differences remain, such as this scene of attempted rape of which a young woman is the victim by two thugs under the eyes of Truman, unable to move. Or, near the end of the story, a scene showing the protagonists of Truman’s life discussing with the creator of the show the continuation of the plot and the desired orientation: the actress playing the wife of Truman having decided to leave, she will be received and as soon as a child will be born from this union, a second show will be launched in parallel with the first (scene which has also been shot and which can be found in the deleted scenes) . Another scenario, prior to this one, is available online. And even another here. So many fascinating readings that allow you to see a script move along the way, even during the shooting itself, to succeed in the final version.

Selecting an actor as popular, irresistible, funny but as moving as Jim Carrey was not a trivial choice. The actor took the film in a more upbeat vein, erasing the darker sides of the human soul while retaining a depth he hadn’t yet had the chance to show on screen. He came to chain a series of comedies and imagine it in such an original film – “the most expensive auteur film ever made “, said the studio itself – was not as obvious as we can suppose today. Peter Weir saw something in him that others hadn’t seen, and his subsequent career showed that he was also comfortable in dramatic roles.

The power of illusion

If reality TV experiences had ever happened before The Truman Show, Nevertheless, the film heralded the wave of shows of this genre that would sweep across screens around the world, including Survivor (since 1997), Big brother (since 1999), History of the loft (2001-2002), and others. He was not, however, the first to broach the subject of a character believing himself or being really a prisoner of a fictitious world. (2). One can cite, in addition to two episodes of The Fourth Dimension (A world of difference and special department), an episode ofamazing stories from 1986, itself the remake of a short film by Paul Bartel from 1968, The secret cinema. We also think of a famous British TV series from the sixties (3). But it is Peter Weir’s film that has made a lasting impression with its ambition, the emotion it exudes, the affection that we can feel for its main character, as if we were ourselves, for a very reduced and concentrated period, viewers of the television show. Music by Philip Glass, taken from his previous works but not only (4) – as well as, to a lesser extent, that of Burkhard Dallwitz – also plays a big role in the artistic success of the film, its repetitive side fitting perfectly with the impression of eternal renewal.

The power the film talks about is that of images, capable of creating a reality in which we are ready to lose ourselves. Far from criticizing his power, he illustrates power. A power used here at the expense of a man, whose whole life is scrutinized by an invisible crowd, and who sells the products presented on the screen to finance himself and fatten the producers and the channel. Perfect marriage of merchandising and of theentertainment… A mixture that reality show will push to the limit since their candidates are not only aware of their condition as guinea pigs but also volunteers.

The creator of The Truman Show, Christof, played by Ed Harris, dismisses Truman at the last moment when it comes to bringing him into line. He does not hesitate to put his life in danger. God, creator, chief screenwriter, is the figure of the demiurge (Lucifer for some), from whom the creature ends up escaping. If Truman turns away from him, it is because lying in truth leads to betrayal. Christoff said: “Everyone accepts the reality of the world around them. » An assertion certainly correlated with Plato’s Allegory of the Cavebut which induces that man cannot rise above his condition, that he is a prisoner of the illusion in which he is locked up (or in which he has locked himself up).

It is on this rather pessimistic conclusion that Peter Weir’s film leads, but he will have been able to do so while offering a work of art combining reflection and entertainment. And while bringing a note of hope. Awareness of one’s own condition is possible. It is even the greatest challenge facing humanity in the light of climate change and the erosion of biodiversity. If the cinema is a “lie 24 frames per second” (As Haneke said in response to Godard), it is to create a reality in which we dive of our own free will for a determined period of time, and in which we recognize ourselves. So use cinema, art in general, to help humanity emulate Truman Burbank and wake up from its illusion.

DISCOVER EVERY SUNDAY A CINEMA CLASSIC IN JOUR DE CULTE.

(1) Note the recent release of a two-film box set by Peter Weir at ESC editions containing The Cars that ate Paris and The Plumber, two early works by the director which allow the detour.

(2) As early as 1959, in Philip K. Dick wondered about reality and its representations.

(3) A seaside town? Village streets filmed by cameras? A hero whose actions and gestures are monitored and who try to escape? One thinks of course of the seminal series of George Markstein and Patrick McGoohan, The prisoner, to which subtle reference is made in The Truman Show, I leave it up to you to find it.

(4) The American composer composed three original stage pieces for the film, he also makes a small screen appearance in the where Christof caresses Truman’s face on a giant screen.

Addicted to music and cinema since childhood, traumatized by Romero’s Zombie, I have been trying to get over it ever since by diligently browsing through Audrey Hepburn’s film.

2022-05-15
Previous Post: Nayanthara walks the red carpet of the Côte d’Azur before his wedding?
Next Post: Beware of payday advance promises