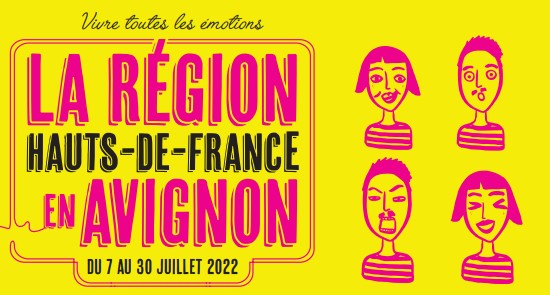 The Hauts-de-France Region accompanies 16 regional companies, ambassadors of regional creation, at the OFF d’Avignon festival.

Companies are selected according to several criteria. The Region wanted in particular equal representation of companies by proposing in particular room for female creation: 56% of the selected projects are carried out by women. It also seemed essential that the teams supported be regularly renewed in order to give companies the chance to emerge thanks to this system. Thus, two-thirds of the selection have not been accompanied under this regional system over the past four years, half of the teams selected have never proven it. Other criteria such as the plurality of dramatic writings mixing different mediums and formats, the quality of the creations, as well as the vitality of regional creation enabled these 16 companies to be selected to participate in the Hauts-de-France scheme. in Avignon.

THE COMPANIES SELECTED FOR THE 2022 EDITION

Company BVZK – Janis
Harnes (62) / Musical theater
The actress brought us together to trust us: she has always been convinced that she is the reincarnation of Janis Joplin. Through her relationship with the rock n’roll icon, she will gradually weave a story through which her intimate relationship with Janis is mixed with biographical elements of the singer’s life.

Company in the tree – Like Me
Lille (59) / Immersive and ambulatory theater in the swimming pool
Like Me is a stroll in the swimming pool addressing our need to exist in the eyes of the world, to please at all costs, sometimes to the detriment of our truth. Equipped with headphones, the public is encouraged to question self-image in adolescence: real or fantasized image?

Compagnie des Ants dans la lanterne – Our little inclinations
Lille (59) / Puppet
Don’t we all seek to live happily? Is a successful life necessarily a happy life? Doesn’t happiness differ according to everyone’s sensitivities? Hasn’t this quest become tyrannical? The company Des Fourmis dans la lanterne does not claim to answer it but invites us to question ourselves together.
This piece for young and old features puppets manipulated on sight, without words but with strong images (and
metaphors)

Company Small steps in the big – Hernani on Air
Montataire (60) / Radio drama
This evening, Dona Sol is Emilie Adlar’s guest on the set of the program “Chuchote-Moi à l’oreille”. She comes to testify to the radicality of her love choice. Equipped with headphones, the public is invited to both listen to and be a spectator of this work of literary heritage.

Compagnie du Rouhault – Odysseys 2020
Bethune (62) / Theater
Odyssées 2020 is the result of the major Escales/Odyssée project bringing together several structures in Pas-de-Calais around the Homère exhibition at the Louvre-Lens, and inviting four authors in writing residency in the colleges of Béthune, Sallaumines, Bruay-la -Buissière and Lens, in contact with 6th graders.

Compagnie Filigrane 111 – The art of losing
Carvin (62) / Emergence / Radiovisual theater
The story of an Algerian family, from Kabylia to suburban HLM through war and exile. Naïma delves into a family history that has never been told to her. The Filigrane 111 company has chosen to anchor the adaptation of The Art of Losing, (2017 Goncourt High School Students Prize) in Hauts-de-France and to give a voice to its inhabitants through testimonials and images.

Compagnie Jours Dansants – Ghazal (conversation with a woman)
Laon (02) / Theatre, dance, documentary
Ghazal (Conversation with a woman) is part of a collection of testimonies from three Syrian women who fled their country, met in Paris and Picardy. The show organizes the meeting and the friction of an auto-biographical writing, memorial materials, theater, dance, cinema
documentary and musical creation on stage, around listening and revolt as becoming revolutionary.

Escape Company – Fief
Saint Quentin (02) / Theater
The Compagnie L’Échappée is putting on a show around a young boy who has just grown up and lives in a small town between
the suburbs and the countryside. He navigates between boxing, friends, spliff, and a girl. Their stronghold is a territory, and above all it is a language. A slamming, brutal, composed language, made up of slang words, verlan…

Compagnie Lolium – Louise of your choice
Lomme (59) / Emergence / Theater for young audiences
With the world we leave them, should the children make a revolution? Should we always listen to us, the grown-ups?
…. The Lolium company offers a modern fable that travels between the court of Louis XIV and our time. A joyful show that wants to twist in every way the question of freedom, the relationship to authority, and the right to disobedience.

Compagnie Que Mas – And we are all gone
Anizy-le-Château (02) / Emergence / Theater
At the same time and for different reasons, three women suddenly break with their daily life: they leave their lives, leave their town, leave their destiny to go to face a huge wall that defends access to what the in the name of “The Zone”. A story that combines anticipation and realism, in a deep and alert writing, tinged with the energy of the best series.

L’Amicale – Friends we need to take a break
Lille (59) / Participatory show, theater & open air
FRIENDS is an invitation to thought and the joy it brings, it’s a short, manual, jovial piece, full of waterfalls, lianas and waves. A ten-hour journey, intimate and adventurous, playful and philosophical in which we advance step by step, like an initiatory tale, until we “let go of everything”.

La Ponctuelle – Sealskin
Lille (59) / Emergence / Theater
What is the seal? A carte blanche to Cie La Ponctuelle for two proposals around the difference. Two proposals that resemble and complement each other, from their theme to their way of having been created and staged, by two artists who share a deep artistic friendship.

The Wall Pass – From Silence to Explosion
Assainvillers (80) / Theatre, rap, video
Du silence à l’explosion is a hymn to solidarity and a tribute to the heroines and heroes of our time, who have braved all the dangers to reach us. A total, multicultural and multimedia show (theater, rap, dance, video and animated films), it tells us how French solidarity and exiles fight daily, hand in hand, for a dignified living together.

Théâtre du Prisme – If I lie to you, you love me
Villeneuve d’Ascq (59) / Theater – young audience
If I lie to you, do you love me? tries to understand why adults, today, are composed like children, and wonders if their concerns and their anxieties would not destroy the same thing that they want to protect. Partly told as a true story, an investigation, but above all as a purely imaginary story.