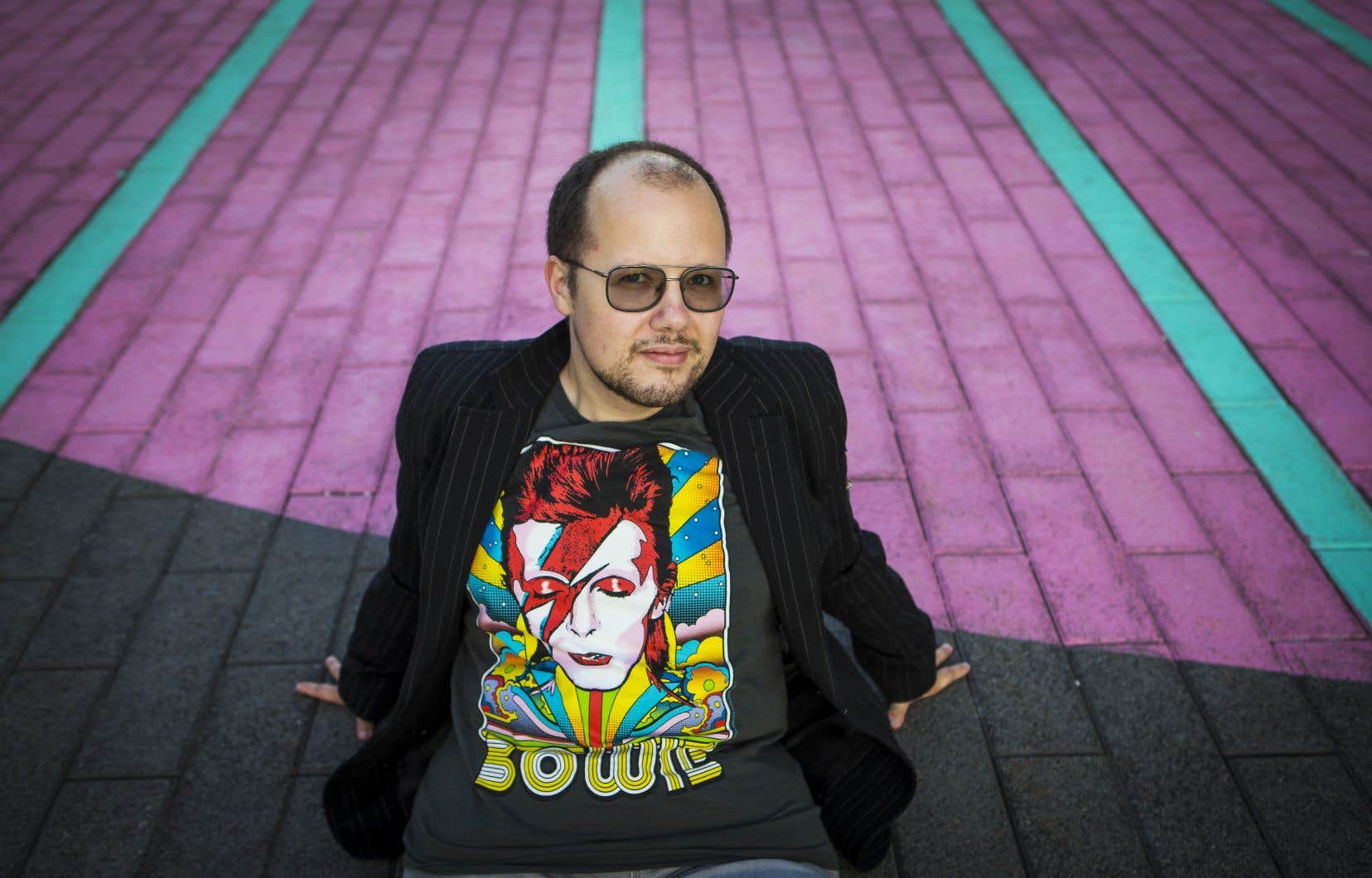 As for so many ostracized young people, the library of his secondary school was for Nicholas GiguÃ¨re a refuge, an enclave of silence sheltered from all the jeers he suffered everywhere else. In the tiny department dedicated to music, biographies of Prince, Freddie Mercury and David Bowie, a sort of Holy Trinity of rock masculinity playing on all virile archetypes, three essential emissaries who continue to this day to console the marginalized of everywhere on the planet: yes, there is a world where their difference is not a manufacturing defect, but a badge of honor. Yes, it will be possible for you to be the hero of your own life, and not just for a day.

The Columbia Club will soon drop in the letterbox of the family house, in Beauce, two compilations to prepare the best songs of the interpreter of Ziggy stardust. “Perhaps even more than in the literature, which was heterocentric, Bowie offered me a gateway to a wackier, freer universe”, confides the one who told very loudly a sexuality both sad and hectic in Waiting lines and Someone (Hammock, 2017 and 2018).

Flamboyant, androgynous, excessive, ceaselessly in search of a new alter ego allowing him to better reveal himself; Bowie was doing a go out bisexual in 1972, a statement that its exegetes have sometimes attributed to a simple desire to highlight Western prudishness, but which will act, regardless, as a balm for many young members of LGBTQ communities, or more broadly among those who rejected the role assigned to them by society. “Bowie showed me that we can exist differently, that we may be exposed to stigma and judgment, but that we can keep our heads above water by being who we are.” . “

Twenty years after this epiphany as musical as it is identity, Nicholas GiguÃ¨re celebrates the transformative legacy of the Thin White Duke in Freak Out in a Moonage Daydream, more than three hundred pages of paranoid poems, blue flower, masochists, avengers and hallucinators, a sum-book in the form of to crush developed from the lyrics (translated in Google Translate) of twelve discs of Bowie (of space oddity in 1969 to Scary monsters (and super creeps) in 1980). A gigantic textual paste crushed then transformed by the words of the poet who, paradoxically, is undoubtedly revealed more than ever, through mythical figures like those of the man who sold the world and of poor Major Tom.

By shamelessly plundering pop culture and scholarly culture, Nicholas GiguÃ¨re thus accompanied a Warholian work in Baudelaire and Billy Ray Cyrus, Martine St-Clair and Diderot, Meat Loaf and RenÃ©-Daniel Dubois dialoguing. A beautiful collection, yes, like Bowie, but also sometimes very calm. â€œIt’s a collection with lots of characters, full of ‘I’s’ who are constantly disintegrating, mutilating, dying, reborn. But by instilling my subjectivity into these pseudotranslations, I kind of took a long detour through Bowie, back to myself. There is nothing more Bowie than putting on a mask the better to hide nothing.

If I was a man

If it is the occasion for Nicholas GiguÃ¨re to measure himself with questions which appear for the first time in his work, like that of the war or the faith (in sections inspired by the albums Young Americans and Station to Station), Freak Out in a Moonage Daydream also picks up where his previous books left off, notably in a section mocking the toxic masculinity the author suffered as a teenager. Because â€œsometimes being a guy / gets nowhere / sometimes being a guy / it’s cripplingâ€.

“I think that has changed since then,” said the 37-year-old writer, who studied at the Abenaki high school in Saint-Prosper, but high school was for me the incubator par excellence of this masculinity. . It was a place where all that was valued was what was linked to the affirmation of virility, sports among others, which did not correspond to me at all, I who was the perfect figure of the nerd. Young people all need to be assertive and guys have it all by freezing their faces, taking a hit, heating up their drunk tank, to show that they were real men, that they were invincible, that they were not afraid of death. “

Nicholas GiguÃ¨re has often heard the f-word and t-word. â€œThe others had already guessed that I was gay, even before I understood it. That’s what it is, to be called a fif, a fagot, before you even know completely that tragically you love men, just because you’re good at school, because you’re introverted, effeminate. Then you see guys hooking up with girls, and you realize that what you would like is for a guy to do the same to you. But you know if you ask a guy that, you’re gonna blow your throat up in blood, it won’t be long. “

Strange and jubilant text, deliberately cheesy and deliberately cryptic, borrowing from FM waves as from automatic writing, Freak Out in a Moonage Daydream is a work, like that of the late English musician, obsessed with the question of death. The death that took hold of Nicholas GiguÃ¨re’s imagination early on, as is the case with many people who have not been able to taste the privilege of recklessness.

â€œWe sometimes have such a feeling of inadequacy,â€ he explains, â€œwe feel so out of the ordinary, excluded, that at one point, we think about death, that’s for sure. Not just because we are afraid that something will be done to us, but also maybe we would like it to happen, because we would like to end with this suffering of always being singled out. “

“Am I going to take action because I work out twisted scenarios in my book?” No. The idea of â€‹â€‹death still resides in me, yes, but I find that it is a force, to be aware that everything will one day come to an end. These lines also speak of writing. I enjoy life more and more, but I want to continue writing and publishing as often as possible, because I know that life is a race against time. “