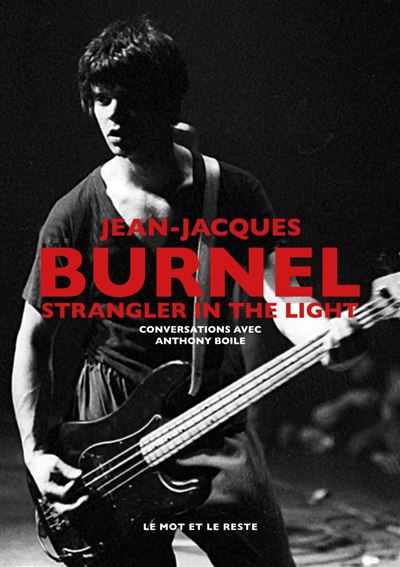 Jean-Jacques Burnel “Strangler In The Light”: conversations with the bassist of the legendary Stranglers!

A true icon of British rock of the 70’s and 80’s, melodist, bass player and renowned producer, Jean-Jacques Burnel will have signed with his legendary strike some twenty albums offering unstoppable riffs with heavy and deep basses, basses sometimes so heavy that they would crush your plexus. A great social observer, Jean Jacques Burnel was able to portray the daily life of his contemporaries with biting rage and irony. This autobiography recounts his journey through the Stranglers but above all allows us to better understand the personality of this anti-rock star. In these interviews with Anthony Boile, the musician testifies for the first time to the influences of its members on the British punk scene, their relationship with the public and the media, or even the recompositions of the group after the departure of Hugh Cornwell in 1990, signs of uncommon vitality and longevity. Twelve chapters, and as many themes, where “JJ” Burnel reveals his personality, the complexity of which he draws in part from his dual identity. “The most French of the English and the most English of the French” evokes his turbulent past but also his European ideal expressed in 1979 with his album Euroman Cometh. Anthony Boyle reports the words of Jean-Jacques Burnel through an exhaustive account and very complete details. The author takes us on the astonishing rise of this budding musician who became a bass player in spite of himself, and later a singer again by force of circumstance. Throughout the chapters, Jean-Jacques Burnel reveals the deep meaning that music and glory hold for him. The book also evokes his various collaborations with Taxi Girl or Polyphonic Size and his parallel project, Purple Helmets with Dave Greenfield, John Ellis, Manny Elias, drummer of Tears for Fears and soxophonist Alex Gifford. Jean Jacques Burnel looks back on various highlights, tragic or funny stories that inspired him several songs, especially on women whose point of view varies according to his own romantic situation at the time (from Nice in Nice to In the End). Songwriter with sometimes acid writing, he tackles more difficult themes such as the ravages of drugs (Don’t Bring Harry), war (Northwinds, Anything Can Happen), murder (La Folie), suicide (Ice) , revenge (5 Minutes, I hate you). Here there are no scandalous details about his fame, his life as a rock star, we really talk about music but also the practice of martial arts and motorcycling, the evolution of his relationship with women and love, his divorce, not to mention his attachment to France, where he now lives. The reading will be all the more captivating if you put the titles mentioned in this biography in the background. This will allow you to hear things in the Stranglers music that you might not have noticed. Beautiful lighting that will delight fans.

Jean-Jacques Burnel – Strangler In The Light-Conversations