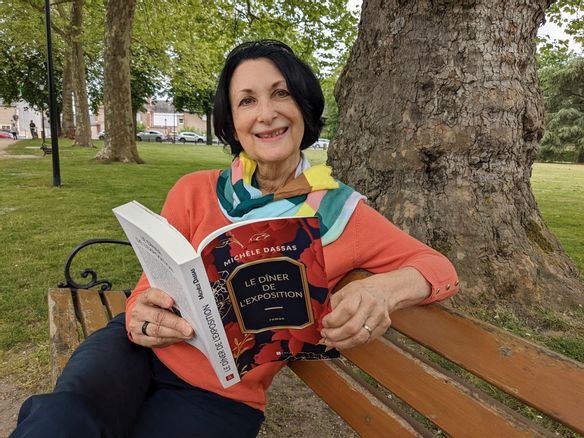 In her latest book, Michèle Dassas evokes Aurélia and the destiny of a woman born a slave.

Passionate about history, the Argentinian writer Michèle Dassas immerses herself in her favorite period, the 19th century, in her latest book which has just been published, Le Dîner de l’exposition. The title of his ninth novel, and sixteenth work, refers to a restaurant that really existed, created on the occasion of the Paris Universal Exhibition of 1855, and which was at the center of a financial scandal precipitating its loss. The narration focuses more particularly on Aurélia, the wife of an aristocrat, Ventre d’Auriol, partner of this famous restaurant.

She discovers Aurélia thanks to a friend

Born a slave, Aurélia is from Guadeloupe. For his 20th birthday, his father took him with him to Paris and made him discover the social salons of the capital. There she meets this man who will become her husband. The book then devotes itself to the fate of this woman forced into exile.

A Readers’ Spring with the association We read everything, from June 9 to 12

Aurélia is in no way an imaginary character since she existed. “I know Guadeloupe from my ancestors and I have a friend there, Sainte-Croix Lacour, who is his great-grand-cousin,” says Michèle Dassas. I discovered Aurélia because he had written an article about her in the Bulletin de l’Histoire de la Caraïbe. From there, I started researching her. »

I can easily put myself in her shoes because I have been to Guadeloupe at least nine times and I know the places where she lived.

Michèle Dassas has an indirect link with Aurélia since she was the wife of her great-grandfather, but she is not his descendant. The author follows the life course of his heroine quite faithfully and reserves the romantic side of the story to the perception of the facts by the young woman, because the story is told from her point of view. “I don’t have his diary, so I try to imagine, explains Michèle Dassas. But I can easily put myself in her shoes because I have been to Guadeloupe at least nine times and I know the places where she lived. »

prime A selection of fleeces

Before the affair of the Dinner at the exhibition, Aurélia will lead a bourgeois and peaceful existence. After the bankruptcy, she took the direction of England before returning to France, under another identity, twenty years later, as a wealthy annuitant. “She was a courageous young woman,” says Michèle Dassas. She succeeded in keeping her in line because she had a revenge to take on life. She was born a slave, she had a crack somewhere. She needed to have social status. »

19th century society as a backdrop

In the background of this story, there is also the society of the 19th century and the functioning of the different social classes during this period. “At that time, everything was well stratified, underlines Michèle Dassas. And skin color was also considered very important. »

The spring of Bourges, setting of a detective novel

This putting into perspective of Aurélia’s destiny contrasts a little with what the writer from Argent-sur-Sauldre usually writes. Because if she regularly highlights characters through fictionalized biographies, she focuses instead on people who have had a public existence, which was not the case with Aurélia. But this journey, and this link with Guadeloupe, made Michèle Dassas want to share this story with the public through this book.

In Aubigny.? Michèle Dassas will be signing her book The Exhibition Dinner on Saturday May 21, from 10 a.m. to 12:30 p.m., at the Maison de la Presse in Aubigny-sur-Nère. This book was published by Ramsay editions. Price: 19 euro.