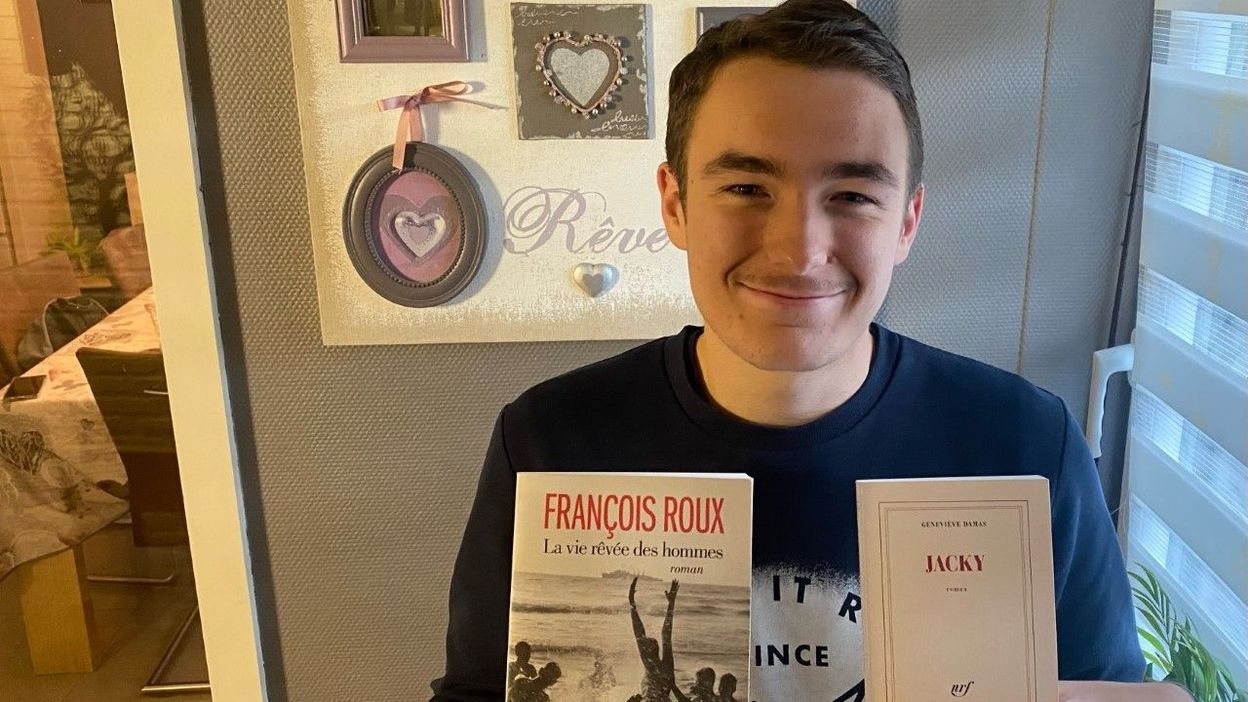 “I rediscovered the pleasure of reading during confinement”

Today we invite you to meet a young literature enthusiast: Antoine Duchaine, 16, who runs “Le coin livreque”, a blog and an Instagram account dedicated to books. It is thanks to confinement that he rediscovered the pleasure of reading. Almost a year and a half later, he shares his favorites with a community that is growing day by day (3260 subscribers).

On September 20, the “Filigranes Prize” was awarded. A literary prize (launched by the eponymous bookstore) whose aim is to reward a novel of quality and accessible to all. Eight novels were in competition and these were judged by about sixty juries: journalists, bloggers and regular readers. Among them, a very young literary influencer caught our attention: Antoine Duchaine. At 16, it was the first time he had taken part as a jury in a literary competition. His atypical profile intrigued us, we wanted to know more about this teenager who was passionate about books …

RTBF Culture: Hello Antoine! Can you explain to us when and comment you decided to take an interest in literature?

Antoine Duchaine: “Reading has always been a part of my life. I have a precise memory of my grandmother who read tales to me when I was about three and a half years old. “Little Red Riding Hood”, “The Three Little Pigs”â€¦ It was a moment that marked me and made me appreciate literature. Growing up I was a little disinterested in the reading car the books I had to read for school were poor and interested me little. It was during confinement, in March 2020, when we found ourselves cut off from the world that reading has re-imposed itself on me. I grabbed a book by JoÃ«l Dicker, “The Truth About the Harry Quebert Affair”, I plunged into it and two days later came out amazed! Reading has never left me since!“

RTBF Culture: When did you decide to launch your blog “Le coin livreque” and share your literary favorites on Instagram?

Antoine Duchaine: “Still during confinement, it was in January 2021! That’s when I decided to write constructive and argued columns and share them online. Everything then happened very quickly. I quickly obtained the trust of major publishing houses such as Albin Michel or the Iconoclaste and I was able to interview many authors! I never expected to have so many followers and so much positive feedback in such a short time. Lately I was even part of the jury of the “Prix Filigranes”! It is really a great pride for me.“

RTBF Culture: How did you experience the experience of being part of a literary jury at only 16 years old?

Antoine Duchaine: “I joined the jury thanks to the literary blogger FranÃ§ois Coune of “Delivery of words”, whom I admire a lot. We met at the end of August with the other members of the jury to discuss our conferences and it was a real moment of pure happiness! We were able to discuss our common passion, it was ua rich evening filled with interesting exchanges and sharing. An unforgettable experience for me! I will do it again without hesitation!“

RTBF Culture: Do your teachers, especially of French, follow your passion and your work as a blogger? And your classmates, what do they think of the “Book Corner”?

Antoine Duchaine: “My teachers attracted me 100%. Sometimes they advise me on novels, sometimes I am the one who advises them. I am fortunate to be able to exchange with them and then, writing reasoned columns on books is also a good exercise for the French course, we are not going to lie to each other! (laughs) The same with my friends, they are kind and ask me for reading advice. Some people read more thanks to me and when we receive the list of books to read at the beginning of the year, they ask me which novel to choose! There is no mockery, far from it!

RTBF Culture: What is your favorite literary genre and what is your latest favorite novel that you wanted to share with us?

Antoine Duchaine: “My favorite book styles are thrillers, historical novels, fantasy novels and (self) biographies! For the favorites I would like to share two, resulting from the selection of the “Prix Filigranes”.

The first is: “The dream life of men” by FranÃ§ois Roux. Un poignant and magnificent novel! I was happy by this story from the first few lines. This book is a splendid love story between two soldiers in the post-war world. FranÃ§ois Roux’s writing is addictive and grandiose.

The second is: “Jacky” by GeneviÃ¨ve Damas. What a slap! An absolute crush! I devoured it quickly, in just a few hours! I find it a livre which should be read in all schools in Belgium, I even spoke to my French teacher. It is the story of a moving meeting between two students from two worlds which a priori, everything opposes: Ibrahim, who is Arab and Jacky, who is Jewish. From this meeting is born a very beautiful friendship. It is a book that questions, encourages dialogue and advocates tolerance. “

RTBF Culture: Do you already have an idea of â€‹â€‹what you would like to do later? Perhaps a profession related to literature?

Antoine Duchaine: “Nothing to do with literature! I think I’ll head to medicine. Reading will remain a passion and I hope it will continue to grow over the years. My wish is to be able to continue to discuss my lectures with more and more people because basically that’s what I like most about reading. I would like to thank all my family for their support and more particularly my mother-in-law, my half-sister Pauline and my grandmother! I would also like to thank all of my teachers and mainly those of French as well as Madame Massing, Madame Charles and Madame Husquinet. I also thank StÃ©phanie des Horts, writer at Albin Michel, because she has supported me since the beginning of my blog just like AmÃ©lie, a bookstagramer. And finally, I would like to thank JoÃ«l Dicker because he gave me back a taste for reading. “

2021-09-30
Previous Post: Netflix, Amazon Prime Video, Apple TV +… Which series to discover in October on the platforms?
Next Post: Why are social features so important in an app?