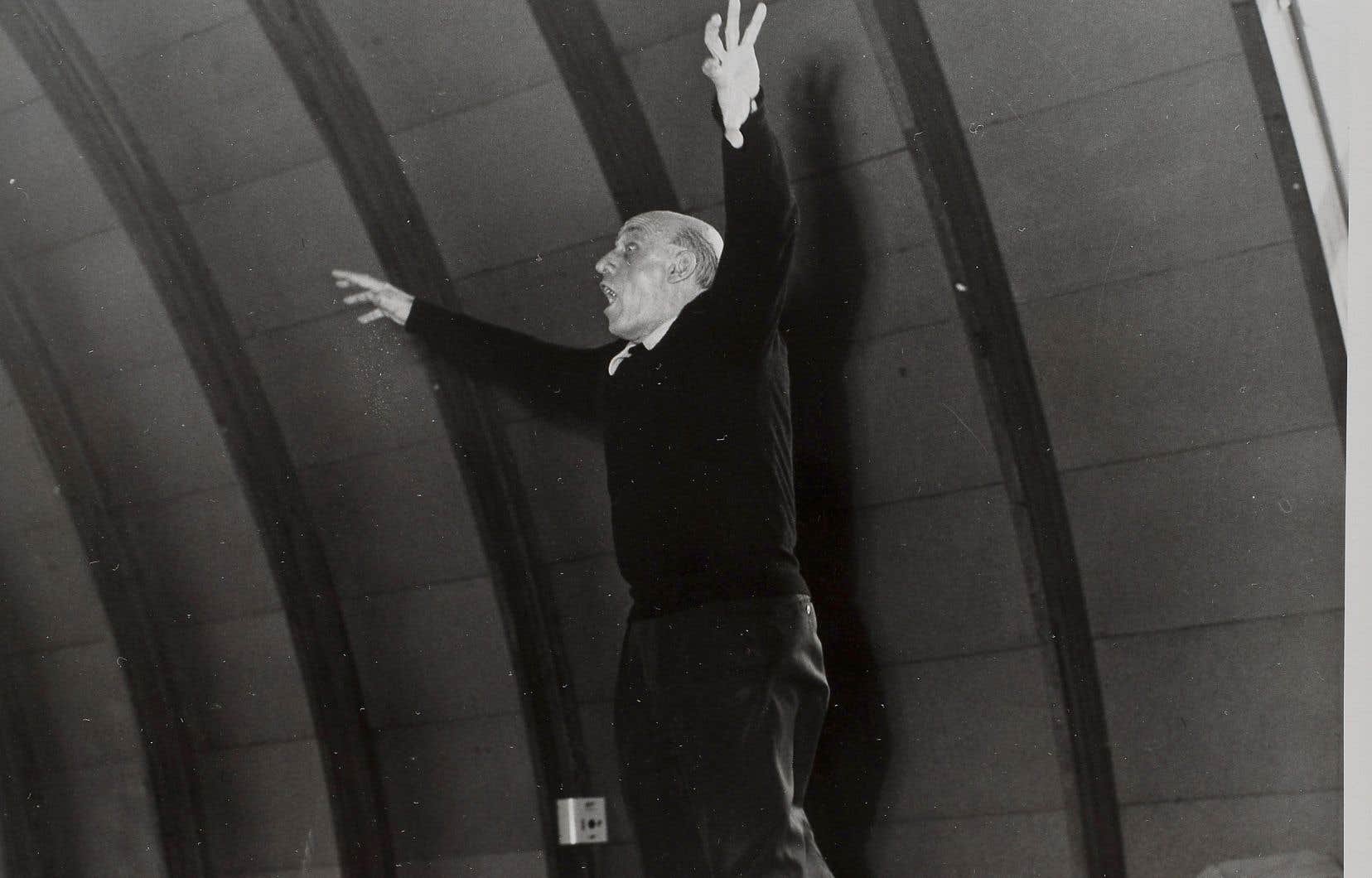 [Grand angle] Dimitri Mitropoulos, the “priest” with the devil in his body

Sony publishes a luxurious and major box set dedicated to the complete recordings of conductor Dimitri Mitropoulos made in Minneapolis and New York. This reissue comes at the right time to remind us of an extraordinary character.

The biography of Dimitri Mitropoulos (1896-1960) published by William R. Trotter in 1995 is titled music priest (music priest). The image is perfect for a conductor who, at the head of important institutions, the Minneapolis Orchestra from 1937 to 1949 then the New York Philharmonic from 1949 to 1958, invested himself in the defense of the music of his time, and who, in his personal life, shunned gold, worldliness and wealth.

Grandson of a priest, nephew of an archbishop, Dimitri Mitropoulos was destined to become a monk. But when he began to learn the piano at the age of seven and when some realized that at 14 he had received the main operas of the repertoire, he was sent to the Athens Conservatory. There he composed an opera on Sister Béatrice by Maeterlinck, noticed by Camille Saint-Saëns who recommended him to the Brussels Conservatory. From Brussels, Mitropoulos went to Berlin to study with Busoni, a momentous encounter since Busoni convinced him to become a performer rather than a creator.

This is how Mitropoulos found himself assistant to Erich Kleiber at the Berlin Opera. Kleiber’s recommendations will then open the doors to him. At the age of 29, he became conductor of the Greek State Orchestra and on February 27, 1930, invited by the Berlin Philharmonic, he created a sensation: Mitropoulos replaced his soloist, the pianist Egon Petri, at short notice, and played and lead the… 3e Concerto by Prokofiev! The news of the feat made the rounds of the musical planet.

Death on the podium

Thirty years later. On October 31, 1960, Mitropoulos conducted in Cologne the 3e Symphony by Mahler. Microphones capture the concert. The state of health of the leader, already previously subject to heart problems, is worrying. The people in charge of the orchestra allow him to give up the concert, but nothing works. At the end of the evening, Mitropoulos takes the night train to Milan. He repeated the same work the next morning with the Orchester de la Scala. The orchestra greets him with a standing ovation. “I’m tired, but I’m like an old car: the parts are worn, but it works,” he told them. Arrived at bar 80 of 1uh Mitropoulos stops, sits down. The orchestra waits for instructions, but the conductor’s body freezes, tilts forward and falls on the music stand. Dimitri Mitropoulos died in music, for music, in the symphony of the “great everything”, which celebrates life, nature, God and love!

From Berlin to Milan, an arch spans the extraordinary life of the most legendary phenomenon of musical memorization since Mozart. To be free and attentive, Mitropoulos repeated Wozzeck de Berg by heart and could repeat anyone, anytime, quoting the bar number. Mitropoulos also had many enemies, as he was very atypical: ascetic in his life with regard to possessions and possessions; generous and, therefore, often abused; homosexual and, therefore, ostracized. Exalted conductor with unorthodox gestures, his body seemed possessed by the music.

There are two types of gaze on Mitropoulos: a New York microcosmic eye and a more universal perspective. The New Yorker, who colors Trotter’s book and a recent article in the New York Timesadopts a victim perspective: hated by a section of the New York Philharmonic, particularly for his audacious programming, admired by the musicians of the Metropolitan Opera, Mitropoulos lived through hell on earth, suffering the repercussions of the common cabals of the musicians of the Philharmonic and the journalists, as well as the betrayals of his former lover Bernstein, determined to take his place, his record publisher (New York) putting the icing on the cake by denying him to record what he should have recorded.

It’s been a long time, of course. But let’s look at it coldly. At the end of the day, there is this box of 69 CDs. Is there a portrait that allows us to identify the style of a giant of orchestral conducting? Absolutely ! In this, this box offers the exact counterpoint to the Boulez and Masur boxes commented on recently: the complete collection brings together for the first time in a presentation of great luxury, with a superbly documented book, documents that have mostly disappeared from the catalog. Moreover, the box completes the recorded portrait of the New York Philharmonic, Mengelberg, Toscanini, Rodziński, Walter, Bernstein, Boulez, Mehta, Masur having already been treated.

Can we blame Columbia (now Sony) for holes in the legs? Not really. In the 1940s and 1950s, it was not like today where everyone recorded at all costs, the same label (DG with Nézet-Séguin and Dudamel) being able to publish the 8e Symphonyby Mahler twice in the same year. We can regret not hearing Mitropoulos in Mahler, but Mahler (interest was budding, the market was nil) was named for Bruno Walter, a friend of the composer. The great repertoire at Columbia was the business of Eugène Ormandy and George Szell. We weren’t going to have Beethoven, Brahms, Mozart and Haydn recorded at Mitropoulos.

And then Mitropoulos had a reputation for promoting XX musice century. On a so Scriabin (ecstasy poem, fire poem), Shostakovich (5e, tene symphonies), Prokofiev, Kodaly, Vaughan Williams (fabulous!). There are spectacular popular orchestral pieces (Polovtsian dances, sorcerer’s apprentice, fantastic symphonymany Tchaikovsky) and accompanying discs by great soloists, including several major ones: theEmperor with Casadesus, the 1uh Concerto of Shostakovich with Oïstrakh, the engravings with Zino Francescatti for example.

The “known” discs of Mitropoulos are the Fantasticthe Patheticthe tene by Shostakovich. There are many other things to glean here, and many remastered documents are also available for listening on demand on the platforms. First there is the Minneapolis era (1940 and 1947). It had been published by specialized historical labels, but the use of original sources is a pleasure to hear. There is a large 2e Symphony of Borodin, L‘island of the dead of Rachmaninoff and the only example of Mitropoulos in Beethoven (a Pastoral with sharp accents). This period is known for the 1uh recording of Mahler’s “Titan” symphony, his American premiere in 1941. 3e by Schumann (what a finale!), that the quality of execution nowadays is sharper (wood). The lack of absolute formal perfection is a downside even in New York.

In the New York period, we rediscovered in particular an immense 3e Symphony of Mendelssohn which surpasses that of Minneapolis, a Harry Janos exceptional Kodály, thesorcerer’s apprentice. The addition of ball masquerade by Verdi at the Met confirms that Mitropoulos was a formidable opera conductor. The box includes Wozzeck of Berg, Erwartung by Schoenberg, vanessa of Barber and a strange summary of Boris Godunov in English. To go deeper, you will have to look on specialized labels for evenings of legends: Electra in Salzburg in 1957 or The force of fate in Florence in 1953.

How to unite micro and macrocosm? There is this scathing review by Virgil Thomson describing Mitropoulos as “too sensitive, too overflowing, too brutal, too intelligent, too insecure, lacking in interpersonal skills; a conductor whose excitement bordering on hysteria distorts the music of his nervous passion”. There are these words, weighed, of the remarkable John L. Holmes: “Few recordings of Mitropoulos, except Wozzeck, can aspire to the status of “great writings of the century”. His style was too personal for his readings of the standard repertoire to be unanimous. But he was always an interesting artist with a great personality, able to create exciting interpretations. »

This “priest” very often had the devil in his body, he was so inflamed by music. In an increasingly sanitized musical world, this is what makes it so valuable today.

To see in video