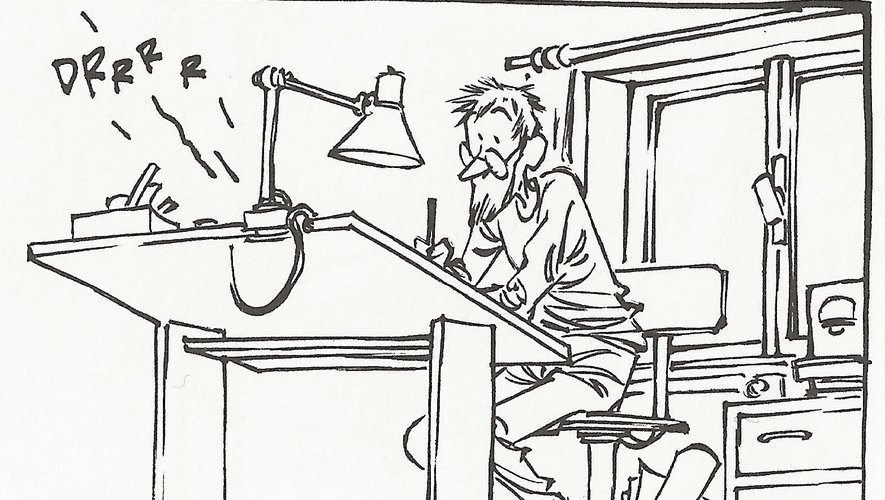 Exit from the hut in Chalabre on July 31 with Clarke, designer of Mélusine

Comics are in the spotlight this summer in Aude. The county council has launched the Exit de case operation and after events in Narbonne and Port-la Nouvelle, Chalabre is hosting its first comic book festival organized by the municipal library. Under the hall, on Saturday July 30, workshops and signing sessions will follow one another with a prestigious guest: Clarke. The designer of Mélusine, the little apprentice witch who has long animated the pages of the newspaper Spirou, star of 27 albums. Clarke, who has offered her work, moving towards a more adult comic strip, will also be at the Maison de la Montagne de Roquefeuil on July 29 for a comic performance. But the Chalabre festival is also an opportunity to showcase authors from the department such as Ygaël, Cee Cee Mia, Notto or Laulec.

A major signing of Belgian comics this year will give an additional dimension to the release of cases, the operation to promote this form of creation created 8 years ago by the Aude departmental council. Clarke, at the head of a substantial work, is above all the draftsman of Mélusine. He will participate in a comic performance on Friday July 30 at 6 p.m. at the Maison de la Montagne de Roquefeuil before sponsoring, the next day, the first comic book festival in Chalabre, under the Halles.

Mélusine is a comedy series that has long topped the charts. After a first appearance in the pages of Spirou, the little witch drawn by a quasi-beginner (in 1992), will quickly take to ease and be there every week. As a result, the albums follow one another and this fantastic-humorous universe makes thousands of young readers laugh. Nephew of Pierre Seron, inventor of Les Petits Hommes, another star creation from Dupuis editions for the Spirou newspaper, Clarke felt he was a prisoner of this success and this character. He therefore tried to diversify, to change style and name (Valda), to give other series a chance. He also summed up realistic drawing and adult humor.

Gifted with drawing, with a formidable speed of execution, he has become an essential name in Belgian comics. His visit to the Aude, for two days, is a chance for readers, young and old. The youngest could ask for dedications from Mélusine (or her amusing friend Cancrelune) while the oldest will no doubt appreciate her latest series, Urbex (volume 2 of which will be released at the end of August at Lombard) or her anticipation series like The Danes, Dilemma or Akkad. And his visit to Chalabre will also allow fans to ask him about his next project, New China, a graphic novel for Delcourt editions, the first pages of which he unveiled on his website (https://clarkenet.wordpress.com/ ).

Organized by the municipal library of Chalabre, this first festival of comic strips in the Haute Vallée de l’Aude, in addition to the prestigious sponsor, invited around fifteen authors, mainly local, proof that comics are particularly dynamic in the department. Workshops will be led by Ygaël, Cee Cee Mia and Olivier Faure and from 4:30 p.m., still under the hall, the central place of this day devoted to the 9th art, it is a “battle of drawings” which will oppose two local cartoonists: Notto and Laulec. The first is a specialist in absurd puns while the second draws his inspiration from the lives of cats.

Also not to be missed is the lecture at 3:30 p.m., town hall hall, by Jean-Marc Lofficer on the story of Dr Strange. It turns out that this writer and former comic book scriptwriter, a great specialist in the Marvel universe, settled in Chalabre a few years ago with his wife, Randy, also a scriptwriter. He will share his knowledge of a world that largely stems from the imagination of Stan Lee that Jean-Marc L’Officier has known personally. Proof that all comics, without exception, have the right of citizenship in the Aude and its Exit from the box operation which will end on October 8 in Leucate with a workshop and a performance drawn to music by Laurent Bonneau, an author from Narbonne who has been living since a few years in the Pyrénées-Orientales.

Cee Cee Mia, the screenwriter who multiplies the releases

Difficult in recent weeks not to fall in bookstores, comic strips, on a title written by Cee Cee Mia. The screenwriter from Carcassonne has been accumulating novelties for a few months. In addition to the third volume of the adventures of the urban dancers of Beyond the Stars, and a 5th unpublished adventure of Complots à Versailles (Jungle) such also proposes to find the three young investigators of La Brigade des souvenirs and launches a new series for big teens, Evolution Z.

A screenwriting knowledge that she will share during a workshop, Saturday July 30, under the Halle de Chalabre, as part of the festival, from 3:30 p.m.

With her friend Carbone, originally from the Pyrénées-Orientales but living in Martinique for a couple of years, Cee Cee Mia developed the concept of the Memories Brigade. Three children trying to unravel riddles from the past. After the 14/18 war and the children from Reunion placed in the Creuse, Théo, Tania and Alban will try to find Bob’s trace. Théo’s grandfather keeps a superb Mercedes in his garage. Always drawn by Marko, this story highlights the automotive industry and… feminism. An educational notebook makes it possible to replace the story in its context.

Cee Cee Mia, on the other hand, is alone in writing the first volume of a new horror series: Evolution Z. As explained in the preamble, she quite simply “took up her son’s challenge to write him a zombie story”. Nowadays, René Zayer, a wealthy industrialist has integrated an orphanage on a paradise island. A little paradise that many young people dream of, even Adaline who nevertheless has a perfect life. It is true that she is the daughter of a famous pro basketball player. When the young girl is found bleeding in the villa of her parents, the latter murdered, she is naturally adopted by Zayer. If at first she is very happy with her fate, she quickly realizes that the island is actually a zombie nest. We appreciate in this comic the evolution of the character of the heroine who turns from a small bourgeois plague into a frightened prey forced to survive on her own. The drawing is by Tomm Bulyne.

Originally from Limoux, Ygaël will be present on July 31 in Chalabre. He will lead a comic book creation workshop from 11 a.m. in the hall. An activity accessible to children from 10 years old. Making an album is an exercise that Ygaël masters perfectly. He already has three titles to his credit this year. Biographies published by Faton. A first on the childhood of Leonardo da Vinci, a second, published in June, on Mary Anning, hunter of fossils and a third in July on Champollion.

Educational comic strips, the trademark of this designer from Aude. Another string to Ygaël’s bow: the coordination of the L’Atelier BD podcast, the last issue of which was recorded last Friday, in public, at the Espéraza library, still as part of the Exit de case operation.