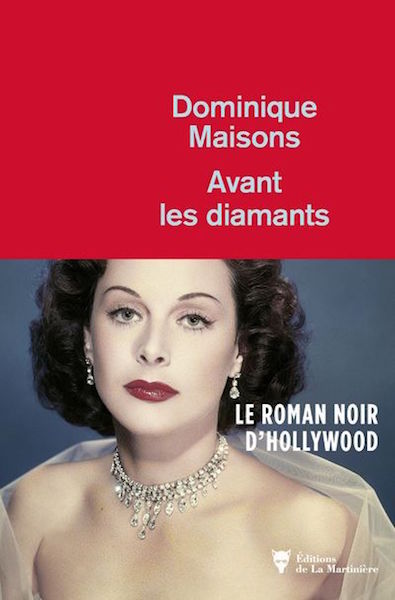 Before diamonds by Dominique Maisons is a half-real, half-fantasized novel. It is above all a novel behind the scenes of Hollywood. A choral story of great mastery and above all very dark. We meet famous figures and colorful characters, around a reflection on beauty, actors and money. A great thriller Ã  la James Ellroy.

To resume : Hollywood, 1953. The film industry is an arsenic-filled cake fought over by the Mafia, the army, and the Catholic virtue leagues. In this moral and political swamp, only those souls who are ready for anything survive. Failed producer Larkin Moffat is one of them. A subscriber to series B shootings, he brings hunger pangs to life in the cinema and enrages against this system which excludes him. Until the day he was offered the chance of his life. In this dangerous scheme will revolve around him Major Buckman, gambler and inveterate runner, the very ambivalent father Santino Starace, the impresario and pimp Johnny Stompanato. All will cross their destinies, multiply maneuvers and crimes in this great circus of American cinema. While parade the Errol Flynn, Clark Gable, Hedy Lamarr and other Frank Sinatra, this small unscrupulous world will indulge in what it knows how to do best: managing the masses and ensuring its profit.

The characters are written with force in Before diamonds. They are called Larkin, Santino, Johnny, Annie, Chance, Liz. All of them spread their sprawling wings with one goal: to make movies. But the wishes are not the same: to convey messages, to earn money, to be a recognized actorâ€¦ Or simply to extend one’s power. Everything is done here to create an immersion in the year 1953 in Los Angeles. There is something real to immerse us in the setting (references to the biographies of actors like Errol Flynn or Clark Gable feed the novel), the atmosphere. Next, the novelist Dominique Maisons deploys his own tentacles and draws the reader into its darkness. The cinema here becomes an instrument in the hands of the army, the church, the mafia. Nothing escapes the novelist and he spares none of his characters. We get attached to them easily, well some of them. Indeed if Didi, Liz or even Annie appear to us lost but kind, touching, Larkin Moffat, the corrupt and violent producer (in addition to being mysorine, jealous and alcoholic) has our disapproval from the first lines. With two million dollars, the mission of all this small world is to compete with the big studios. Nothing is less certain, the pangs of small arrangements and great crimes interweaving the destinies of our characters until an apocalyptic end at will. A real slap in the face of the reader.

The book is written with a frantic pace, the links between the characters gradually weave a gigantic web. Or, we do not really know who is trapped, so much is the horror. Dominique Maisons talks as much about the frenzy of filming as about the violence of a couple’s relationship based on a quantified promise. He is as adept at talking about a scenario as domestic violence. And each time, his stories freeze us, because the more we read on, the worse the following horror than the first. However, with the recent #metoo business, everyone knows that making movies can be hell. If women are used to it, Didi refuses to do so. No, she will definitely not make movies at any cost. Too bad she understands it too late … When a character tries to detach himself from the web, the spider encloses him twice more and devours him. Dominique Maisons employs a tone between humor and a sense of detail, of the murky, but all with extreme fluidity. His very colorful writing is all the more appreciable in this novel about cinema. It’s a story that lives up to its name: what are the people of the cinema outside the sets, before success? All of these questions are abysmal and fascinating.

The most exciting and dizzying remains the reflection that Dominique Maisons offers on beauty. We are both in The Congress (Ari Folman) and in Sunset Boulevard (Billy Wilder). Between the affair of “stolen beauty” and the look at women in cinema, everything depends on the capacity of a fantasy machine not to be in a permanent drift. â€œThe function of the actor is to attract, and the best way to attract is to be handsome. A human being who of his own choice decides to become the focal point of general curiosity carries with him a fundamental insecurity, installed long before he makes this choice. [â€¦]. If he wants to remain desirable, the actor must add something more lasting than beauty. [â€¦] Everything we hide deep inside you do your best to show it which we are ashamed to admit you don’t have to run around the sets splashed with light enough to loudly proclaim it [â€¦]. You are the greatest sham in the history of art. I want to unravel this mystery, understand its mechanisms and touch your truth with my finger â€. Have we written more beautifully about the actors? What is most striking is that these words, which seem to be like the note of intent ofBefore diamonds, are spoken by a director who has left the system. He left the system and making a film with him (which will never be released) is such a gift of self that it becomes dangerous for the very life, the psyche of the actor. This permanent ambiguity, this disillusioned look at a devastating industry are the great strengths of a novel that one would dream of seeing adapted to the screen.

Beyond that, we feel the author’s love for the cinema, his critical gaze too, and his taste for excess which are a treat. And it is he, perhaps, who speak best : ” We still live today in a world dominated by frenzied consumerist propaganda. It is not rejecting cinema (I love it) to become aware of the discourse it conveys and rediscover a critical eye. A lot has happened in post-war Los Angeles, and these issues are far less trivial than you might think â€. Before diamonds is also the story of the end of a world which nevertheless has never ceased to be reborn from its ashes and in which self-destruction is the master. No wonder then that this novel begins with an “atomic bomb party”, a party dedicated to the explosion of a bomb called Annie. This is the effect the novel has on its reader.

2021-10-17
Previous Post: Becco Giallo, publisher of political and committed fumetti
Next Post: Eiffel, a romance at an altitude of 300 meters