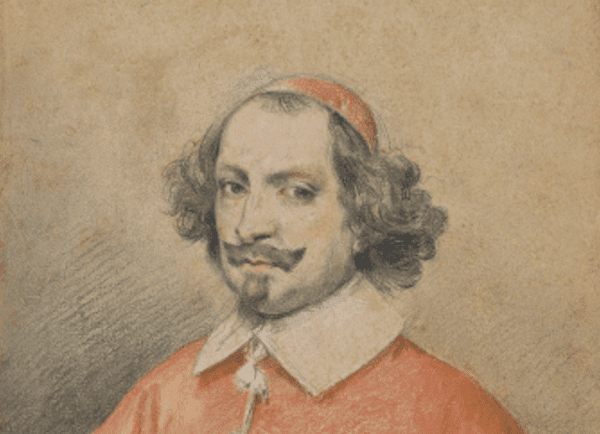 Mazarin, a great minister in the service of the King and of France

Mazarin is far from unknown for Olivier Poncet who has already written a beautiful biography of the great minister in Tallandier editions. Also he knows his subject perfectly and thus offers us a portrait, certainly without concession, but borrowing a lot of affection for the godfather of Louis XIV.

A life, a destiny, but above all a goal: to make France the biggest, the strongest country in Europe (and therefore in the world) and allow the King to reign fully. Without him, without his action, royal absolutism could never have reached such heights. However, Mazarin is not a theoretician of power (unlike his predecessor, the cardinal de Richelieu), much more a pragmatist, a negotiator, he seeks more a sort of consensus around his policy rather than imposing it. Of course, he knows that war is useful, but also that only diplomacy (where he excels) allows long-term gains to be obtained. Instead of physically eliminating his opponents, he therefore prefers to tie them up, to make them his supporters. His opponents, and he had some, did not arrive at least not tender with him: he is criticized for being Italian and therefore not French (the arguments of some on immigration today are more than very close to those developed in the 17th centuryÃ¨ century, according to which, human stupidity invent little and especially recycling). Think about Cardinal de Retz who treats him as Machiavellian like any Italian.

In fact, he follows in Richelieu’s footsteps: lowering the tall ones and reducinguse the power of Habsburg in Europe. the Treaty of the Pyrenees A few months signed before his death, and which puts an end to decades of war between the France and theSpain, is the cornerstone of a whole life devoted to diplomacy. As for the weakening of the great, he came out the big winner of the Fronde and Louis XIV then had only to continue his work.

This is howOlivier Poncet his book shows us a Mazarin, not greedy, but who managed to enrich himself very much thanks to his privileged position within the State (and greatly helped by a certain Colbert). What all in all, quite normal at that time, and many of its detracts was, still, but not on such a scale. He was not greedy or stingy, but adored luxury and the arts, all the arts, hence his famous collections, most of which can be seen in museums in France. He was, as we have forgotten, one of the main patrons of his time.He also had a real passion for books, a true bibliophile, his library (looted under the Fronde but quickly restored) was more important than that of his royal godson and she constituted the fund of the current Mazarine library. A little-known aspect of Mazarin is the organizer of shows including ballets in which Louis XIV danced.

Mazarin has always been aware that without the Queen Mother and the King (when the latter was fourteen and having recovered the fullness of his powers), he was nothing, and that his power depended exclusively on them. And their support was always complete. Beyond the feelings that bound him to Anne of Austria (which caused much ink to flow), it is certain that a great affection, and a sincere admiration, united them with one goal, to allow the young king to reign.

Mazarin knew how to surround himself with the faithful, in increasingly intimate circles such as Abel Servien, the young Colbert u Charles de Batz de Castelmore (who followed him in his exile in Germany during the Fronde), better known it seems under the name of d’Artagnan. Talented men, each in their field, and without whom its policy could not have developed.

The advantage of working on Mazarin for historians is the impressive amount of documents at their disposal. We have a great deal of writings left by Mazarin’s hand, including his notebooks which never leave him and in which he wrote down his reflections, his plans, elements of language for him to meet the Queen, etc.

In fact, we are far, very far from the black legend that surrounded Mazarin, mainly in the 19th century.Ã¨ century. Without him, Louis XIV would never have been the Sun King.

Mazarin, at his death, let a kingdom enlarge, pacified, both inside with the “bringing to the step of the big ones” and the distance from the religious influences “ultras” like the devout party and the Jansenists, as outside , France finally being at peace with its neighbors.

Another biography of Mazarin, some will say. Yes, fine, butâ€¦ But, it is published in the new collection of Perrin editions : the library of illustrious. Contributes to this, in terms of the rich iconography, the National Library of France. More than nine-ixth illustrations of its collections produce whose quality, quantity and diversity nobody can question. More than a hundred reproductions (explained, scenarios) enhance the reading. Sometimes a drawing, a painting, a letter says much more than dozens of pages of words.

History buffs can rejoice in this collection, which allows them to better perceive society, as well as the context of the time in which the personality studied is evolving. Soon, with the same principle, the biographies of Marie Antoinette and of Robespierre, we are waiting for them golden and already impatiently.